Perfuming the Edge of the World, Part 1 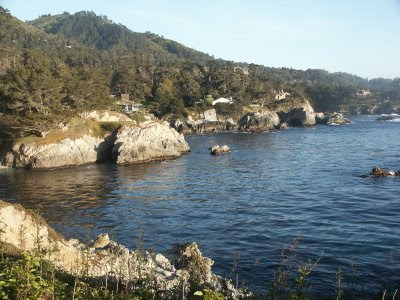 Carmel, California began forming in the late 1800’s on ground previously occupied by the Ohlone (pronounced “Oh-lone-nee”). These were the native hunting and gathering inhabitants who preceded the Spanish occupiers who built the still-existing Carmel Mission.

The entire Ohlone (sometimes referred to as Costanoan) territory covered the coastal area of California from the northern San Francisco bay area to what is now the southernmost boundry of Monterey County. There were many independent subgroups within this larger group, many speaking distinctly different languages than their nearby neighbors.

Costanoan and Ohlone are externally applied names, or exonym’s. The Spanish explorers and settlers referred to the native groups of this region collectively as the Costeños (the "coastal people") circa 1769. Over time, the English-speaking settlers arriving later anglicized the word Costeños into the name of Costanoans. (The suffix "-an" is English). For many years, the people were called the Costanoans in English language and records. According to historian Florence Fava, the neighboring Miwuk tribes were the first to refer to this group as the "Ohlones" - the people of the West.

The Costanoan languages are considered by most linguists to be part of the Penutian family of languages, most closely related to Miwok. There were once several distinct Costanoan languages, including Mutsun, Rumsen, Karkin, and Cholon. These languages were as different from one another as the Romance languages of Europe (French, Spanish, Italian, and Portuguese.) Language loss in California has been especially severe. None of the Costanoan languages have been spoken in more than fifty years. However, some of the few remaining Ohlone people are working to revive their ancestral language.

Some archeologists and linguists hypothesize that these people migrated from the San Joaquin-Sacramento River system and arrived into the San Francisco and Monterey Bay Areas in about the 6th century AD, displacing or assimilating earlier Hokan-speaking populations of which the Esselen in the south represent a remnant. Datings of ancient shell mounds in Newark and Emeryville suggest the villages at those locations were established about 4000 BC.

Through shell mound dating, scholars noted three periods of ancient Bay Area history, as described by F.M. Stanger in La Peninsula: "Careful study of artifacts found in central California mounds has resulted in the discovery of three distinguishable epochs or cultural 'horizons' in their history. In terms of our time-counting system, the first or 'Early Horizon' extends from about 4000 BC to 1000 BC in the Bay Area and to about 2000 BC in the Central Valley. The second or Middle Horizon was from these dates to 700 AD, while the third or Late Horizon was from 700 AD to the coming of the Spaniards in the 1770s.


This monograph is focused on a small group of Rumsen speakers who occupied a small section of the coastal area south of the Carmel River up through the lower end of Carmel Valley to the San Clemente Dam. It is their land on which I was raised in Carmel. From this point forward this group will be referred to as the Rumsen Carmel Ohlone, RCO for short, because it distinguishes them from other nearby groups, and because we don’t know what they called themselves.

This group remained undisturbed until the establishment of the Carmel Mission in the late 1700’s. However initially well-intentioned, the mission system was the equivalent of GITMO on steroids. It was a genocidal pogrom.

Remaining evidence of the Rumsen Carmel Ohlone villages and ways of life are extremely scarce. Few artifacts remain, as they made no pottery, preferring the use of more portable finely woven baskets. Nor did they work with metal. They burned their dead. Their custom of never speaking of the dead precluded the development of any verbal history. They did not value the accumulation of goods or wealth. Of their intricate basketry, remaining examples are scarce. By the time this tiny nation of about two hundred people was ultimately decimated by the effects of the mission system, their previous sustainable, portable lifestyle left little in the way of a footprint of their culture.

Following the confiscation of the missions by the Mexican government in 1834, the few remaining descendants of the RCO travelled to Southern California in 1864 to work on ranches. There, those who can still trace their Ohlone ancestry have recently established the tribes listed below and are making admirable efforts to revive some of the old ways.

Other than these few individuals living several hundred miles away, the tribe is officially classified as being extinct. The Rumsen language, as mentioned above, is no longer spoken and only a few words were ever recorded. By the time photographs of any remaining descendants were taken, tribal life had been virtually obliterated.