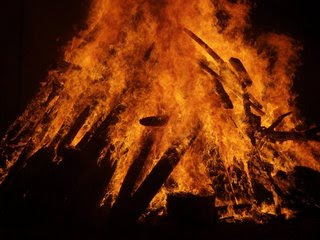 Ancient pagan observance of Belatain takes place in early May. It was considered the first day of summer, marked by bale-fires between which the flocks were driven to summer pastures while being blessed and protected by the smoke.

The corresponding Byzantine and Roman Catholic liturgical event is Easter eve. Early Fathers St. Gregory Nazianzus and St. Gregory of Nyssa give vivid descriptions of the illumination of the Easter vigil. Five grains of incense were set cross-wise in an enormous candle, recalling the sacred wounds retained in Christ's body, and the lighting of the candle with new fire itself symbolized the resurrection. Evidence that stretches back as far as Tertullian and Justin Martyr shows that catechumens were baptized on Easter eve and that this ceremony of baptism was spoken of as photismos, i.e., illumination.

To this day, the lighting of Judas fires are part of the Easter eve observance on Cyprus. Throughout the countryside and in neighborhood churchyards, piles of collected wood are burned to represent the burning of Judas, the betrayer.

Current Roman Catholic observance includes the lighting of the Pascal candle, ornamented with five grains of incense. Sometimes the candle is lit from from a blessed bonfire in the churchyard. The lighted candle procession then enters the dark church to begin a candlelight service in which each member of the congregation holds a candle shares the Pascal fire, passing it from candle to candle until all candles are lighted and the church is beautifully illuminated.

Incense, with its sweet-smelling perfume and high-ascending smoke, is considered by many religions as a symbol of prayer, which, enkindled in the heart by the fire of love, rises up as an exhaled offering.


(This is the second article about religious instinct. The first was Devolution? published on February 14, 2009.)
Posted by Shelley Waddington at 8:51 AM 1 comments