Perfuming The Edge of the World, Part 8 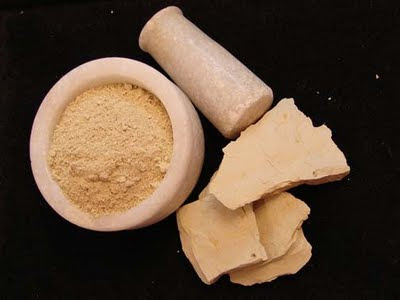 The Case of the Missing Mitti

In preparation for blending, I set out all the fragrance items on my blending table. Sfortunatamente, no mitti to be found. This lapse in my inventory skills will delay the project. Despite the project’s primary objective of ethnobotanical accuracy, I plead artistic license in considering mitti an essential ingredient for helping to capture the fragrance of earth and the first droplets of water on dry soil.

The fragrance of earth is additionally important because the RCO wore no clothing and spread mud on their bodies to stay warm when the weather was cold.

While waiting for the acquisition of mitti, I am using the additional time for tincturing deer antler, fresh sage, kelp, and willow chips.

Deciding On The Carrier

Being there is no recorded historical precedent to rely on, an educated guess would lead to the conclusion that animal fat and/or beeswax would have been the salve carriers used by the RCO’s.

I have eliminated animal fat for this project as seal, sea otter, or deer fat is beyond the scope of my immediate inventory, and I am unwilling to face park rangers whose disapproval would predictably escalate to hostility were I to pursue this direction. Plus, there is the concern of eventual rancidity which is unsuitable for a variety of reasons.

Beeswax, with its high melting point, is not a suitable carrier for fragrance in and of itself, although it would serve well to harden an oil based fragrance. Since some of the subject botanicals I plan to use are indeed infused in vegetable oil, I have given consideration to using a vegetable oil carrier and hardening it with beeswax.

However, the majority of ethnobotanical materials I have developed do not lend their fragrance to oil. I have thus tinctured them in high proof organic grape alcohol, which will not mix into an oil based product. Thus, rather than to sacrifice the use of these materials, I have decided to use organic grape alcohol as the primary carrier, reserving the use of bee products for fragrance only.

I still like the idea of a solid perfume, and even though it would be by neccessity composed of fewer fragrance materials, may pursue this concept as another project.
Posted by Shelley Waddington at 10:30 AM 0 comments