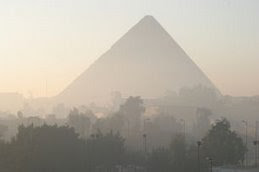 The following Universität Bonn press release was on the newswires this morning:

What Scents did the Ancient Egyptians use?

Researchers in Bonn aim to recreate a 3,500-year-old scent

The Ancient Egyptians cherished their fragrant scents, too, as perfume flacons from this period indicate. In its permanent exhibition, Bonn University´s Egyptian Museum has a particularly well preserved example on display. Screening this 3,500-year-old flacon with a computer tomograph, scientists at the university detected the desiccated residues of a fluid, which they now want to submit to further analysis. They might even succeed in reconstructing this scent, which would be a worldwide sensation.

Pharaoh Hatshepsut was a power-conscious woman who assumed the reins of government in Egypt around the year 1479 B.C. In actual fact, she was only supposed to represent her step-son Thutmose III, who was three years old at the time, until he was old enough to take over. But the interregnum lasted 20 years. She systematically kept Thutmose out of power, says Michael Höveler-Müller, the curator of Bonn University´s Egyptian Museum. Hatshepsut´s perfume is also presumably a demonstration of her power. We think it probable that one constituent was incense, the scent of the gods, Michael Höveler-Müller declares. This idea is not so wide of the mark, as it is a known fact that in the course of her regency Haptshepsut undertook an expedition to Punt, the modern Eritrea, and the Egyptians had been importing precious goods such as ebony, ivory, gold, and just this incense, from there since the third millennium B.C. Apparently the expedition brought back whole incense plants, which Hatshepsut then had planted in the vicinity of her funerary temple.

World Premier with an interesting result

The filigree flacon now under examination by the researchers in Bonn bears an inscription with the name of the Pharaoh. Hence it was probably once in her possession. The vessel is exceptionally well preserved. So we considered it might be rewarding to have it screened in the University Clinic´s Radiology Department, Höveler-Müller explains. “As far as I know this has never been done before. This world premier will now in all probability be followed by another one: The desiccated residues of a fluid can be clearly discerned in the x-ray photographs, the museum´s curator explains. Our pharmacologists are now going to analyse this sediment. The results could be available in a good year´s time. If they are successful, the scientists in Bonn are even hoping to reconstruct”the perfume so that, 3,500 years after the death of the woman amongst whose possessions it was found, the scent could then be revitalised.

Hatshepsut died in 1457 B.C. Analysis of the mummy ascribed to her showed that the ruler was apparently between 45 and 60 years of age at the end of her life; that she was also overweight, and suffering from diabetes, cancer, osteoporosis and arthritis. Obviously for reasons of security, she was laid to rest in the tomb of her wet nurse.

In 1903, over 3,300 years later, the famous Egyptologist Howard Carter stumbled upon the two mummies. However, more than 100 years were to pass before the Pharaoh´s corpse could be identified using DNA and dental analysis in the year 2007. Thutmose III, incidentally, appears not to have shed a single tear for his step-mother, as during his reign he had every image destroyed which showed her as ruler, and which could have belonged to her. (Source of this article listed at bottom of page.)

In my next post I will explore other concurrent perfumes existing in the timeframe of 1457 B.C., thirty-five thousand (!) years ago. Meahwhile, here is a place to learn and see more of this amazing woman: www.travelegypt.com/peopleinfo/hatshepsut.htm. 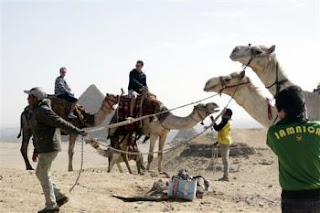 http://www.uni-bonn.de/en/News/127_2009.html
Images related to this press release may be viewed in the Internet under http://www.uni-bonn.de/ >> Aktuelles >> Presseinformationen.
Contact:Michael Höveler-MüllerÄgyptisches Museum der Universität Bonn
Telephone: 0228/73-9710
E-mail: aegyptisches-museum@uni-bonn.de
Posted by Shelley Waddington at 10:26 AM 0 comments